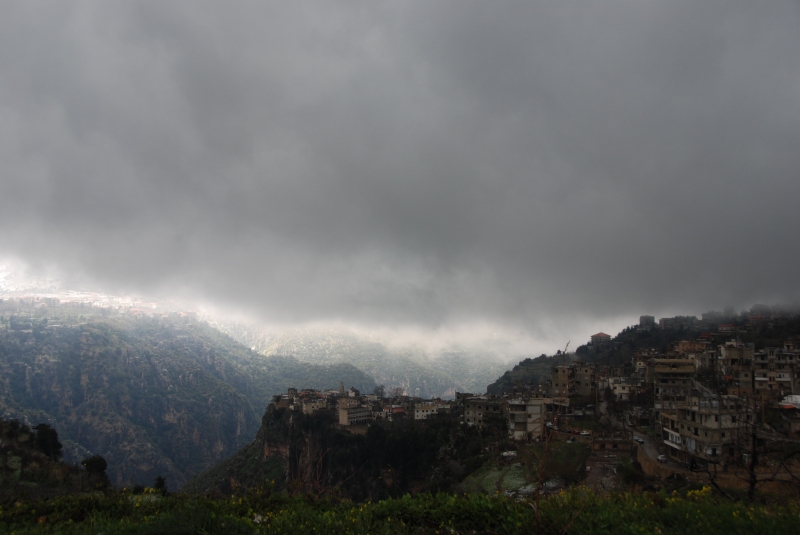 Think of Lebanon or Beirut and you probably see pin sharp blazing Mediterranean days — a dazzling array of mezze, an ice cold drink and the sea below you.  Most of the year, it’s like that by the coast, but climb into the mountains up into the Bekaa and beyond and you feel the seasons fiercely as they change.  My husband tells me that one of his earliest memories is driving with his grandparents, who lived in Beirut, up what were then twisty and precipitous roads into the mountains as far as Faraya and the moment that seemed extraordinary to him then as they suddenly broke through and rose above the clouds in the Mercedes taxi that was carrying his family.  A trip like that can give you all four seasons in a day from the burning seaside to the cloud-drenched mountains where it feels like perpetual autumn or winter. 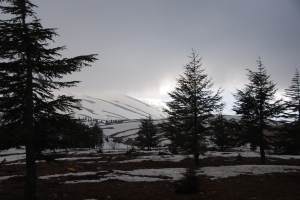 The last time I was up that high was a couple of years ago.  We were just on a level with where the last grove of apparently original Lebanese cedars can be found.  We stayed in a mountain lodge and were plunged into deep winter overnight.  In the morning when we woke up, the road back down, which at one point narrows so that there are sheer drops on either side, seemed impassable.  It wasn’t just the thick snow; there was also a deep fog that brought visibility down to zero.  My husband and children begged to stay, but I didn’t want to be stuck for days up there and knew we still had just a chance of driving down before the next snowfall.  We navigated the road with my older daughter walking in front, telling me where the next bend was.  If we’d missed it, we would have plunged straight down — a possibility that had my younger daughter and my husband holding their heads in their hands in the back.  It took about an hour to travel less than a mile.  But we finally found ourselves beneath the fog and clouds again.

When we made it back to Beirut, it was still  full summer, quite oblivious to the extremities of the mountain.  That huge difference between places that seem so near in such a small country is felt even more strongly within families like mine where some of us are urbanites in Beirut, while others make their lives in the deep countryside in the shadow of the grandest mountains.  I would only really feel the changing seasons when we went up to the Bekaa in autumn as the harvest was in full swing to visit my grandparents and uncles in their village. 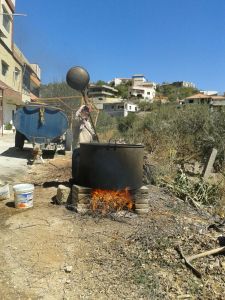 I was talking in my last post about the great cauldron that the men would stir for hours to turn the wheat into bulgur, while the women would be sieving what they produced for impurities.  They still do this every year.  But they don’t any longer have to put up with two whiny little city girls, who would cry and beg for one of the brightly coloured little chicks to take back home with them to their entirely inappropriate apartment on the sixth floor in the centre of Beirut.  This would normally be after watching our nine-year-old uncle slaughtering a hen for the pot — a mass of blood and feathers that made us vow to save one of them.  We’d put the chick in a shoebox when our relatives finally relented and gave us one.  We took it back down with us and swore we’d keep it perfectly, feed it and never let anyone eat it.  We’d start off by giving it hummus for several days — it seemed a kind of baby food for the bird.  A little later, we’d be scouring the kitchen for any leftovers.  We’d cover the little chick, which would still be mewling for its mother, with a blanket and do our best to comfort it.  My father would tease us, saying we’d be having chicken soup for lunch.  We’d scream and shout until he stopped.  We had big plans for our chick, imagining the eggs it would soon be giving us – maybe even a magic golden one.   But underneath, we wavered too.  To eat or not to eat — that was the question nagging away at us.  The deliciousness of it stuffed with nuts and rice — or even the soup my father playfully threatened — balanced against the fun in watching it grow on our balcony beside the big cage of canaries that my father kept.  Anyway, the dilemma was soon solved.  A month or two after we had brought the bird home, the dumb creature managed to throw itself off the balcony, taking a dive six floors straight down.  We’d be unsure of its fate, asking our neighbours if they’d seen it.  Had it splattered on a roof or the ground — or had it managed to fly and save it itself.  Did a bored sniper pick it off from one of the mute, desolate high rises on the Green Line?  Or did the stray dogs that roamed the neighbourhood get it?  We never knew.  But one thing I do know: that when autumn comes — whether up in the Bekaa or here in the mists beside the river Thames where I now live — you need a rich, soul-restoring dish to fully embrace its glories.  I think if they’d offered us a bowl of thick chicken soup with vermicelli that day up in the mountains, I might have given in to my family’s desperate pleas and resigned myself to a few days trapped by snow in that magnificent desolation.  And I might have offered a mouthful or two in tribute to one of our poor, little self-martyred chicks from thirty years ago. 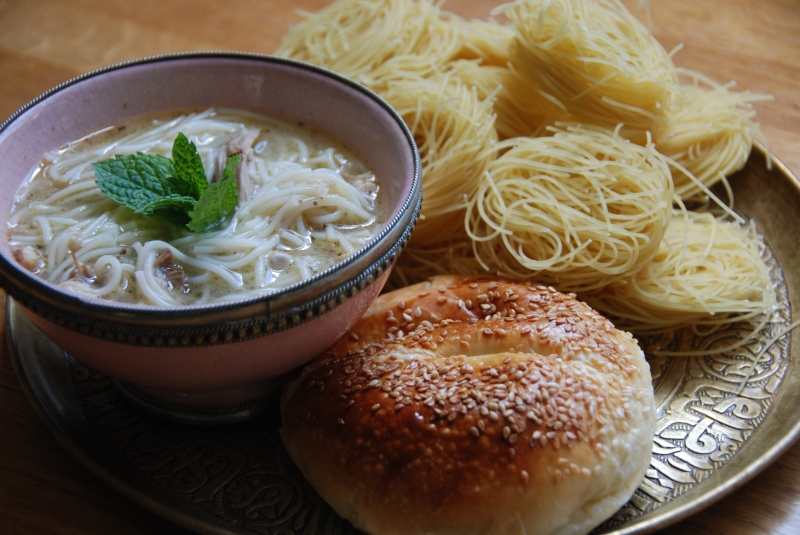 2 chicken breasts with the skin still on

1 sprig of mint for decoration 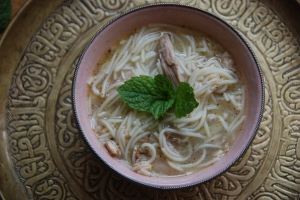 Then add 10 glasses of hot water, the cardamom, 1/2 cinnamon stick and salt

Cover with the lid and leave to simmer for an hour and 15 minutes, or until the chicken breasts are very tender

Remove the meat from the stock and leave aside to cool down then shred the breasts.

Meanwhile, keep the stock on medium heat, then add the vermicelli, lemon juice, salt, pepper and cinnamon, and leave to simmer for 10 minutes

Then add the shredded chicken and cook for another 5 minutes

Garnish with mint and serve hot with Lebanese  bread