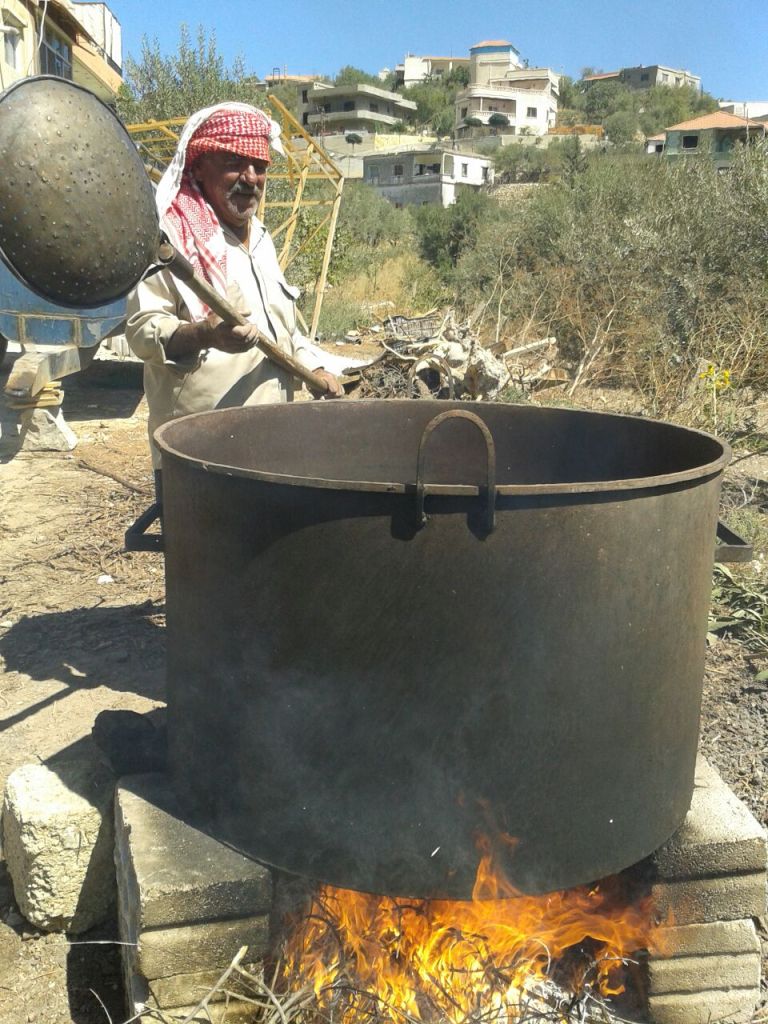 This is the time of the year in the Bekaa Valley when the harvest is being brought in.  In the village where my relatives live, they have all been out in the fields cutting the ripened wheat.   From this is produced their staple food and one of the most ancient in the world — bulgur or cracked wheat. Producing it is one of the oldest processes in the world.  In the Bekaa, it has been done the same way for thousands of years.  Everyone in the village gets involved, including the women and children. Now, I look back on it as something timeless and picturesque, but when I was a child it seemed to go on forever and ended up boring me senseless.   It’s a ceremony and a celebration.  It brings villages and communities together.   The wheat is boiled in great cauldrons.  To heat them needs heaps of wood, which the women and children gather from the woods and scrubland.  It’s the man who stirs the pot, though, for hours.   My uncles still do it proudly.  After all, it’s the staple food in these remote and mostly poor areas, the basis of hundreds of different dishes.

When the wheat has swelled and softened and cracked, it is taken out of the cauldrons and spread out on the rooftops to dry in the sun that is still fiercely warm as August turns into September.  It can be left there for up to ten days. When it’s dry, there is another ritual as the women gather to sort through the wheat, each with a tray on her lap, to remove any impurities.  This is their time for gossip as they spend long hours together picking through the golden grains.  When it’s finally ready, it’s taken to the mill.  The bulgur can be stored all through winter and beyond.  It doesn’t get mouldy, insects leave it alone and it is of course wonderfully healthy.  Up in the Bekaa, it’s what people depend on to live — far more of a basic food than rice, which is by comparison an expensive luxury.  It’s the basis of course for tabbouleh — the most famous of all Lebanese salads ( for which I’ve already provided a recipe on this site).   I was looking for a different recipe in which bulgur is the main ingredient.   And I found one just a few days ago when I discovered for the first time a dish that is a specialty of Aleppo — although it may originally be an Armenian or Turkish recipe.

It’s actually a variation of tabbouleh —  made with the same ingredients, but it has a very different texture and taste.  It has the rather splendid name of Itch.  A Lebanese friend of mine who’s married to a Syrian showed me — and told me she’d been given the recipe by friends in Aleppo. Now, there are words and places that have changed their meaning in the past few years so much that they are now almost unrecognisable.   That is true more than anywhere else in Syria.  Cities like Hama, Homs and Damascus not so long ago held out the promise not just of the exotic but of a continuity of life that gave a palpable sense of ancient ritual that was still vibrant and not just for tourists.  Aleppo with its great, blunt citadel and old city is the saddest example of this.  It’s a byword now for destruction.  It reminds me of how Beirut became for many years — perhaps still is — shorthand for a devastated, unliveable city, so screwed up that it was a joke.  That didn’t mean that we didn’t still live there, going to school or work, taking care to keep out of the sights of the snipers.  We played our music and cooked our food.  Just as they are still doing in Aleppo, I’m sure.    And  let’s hope that the people of Aleppo will one day again be able to share this delicious dish with returning relatives and tourists when the nightmare that their beautiful city is enduring finally comes to an end. 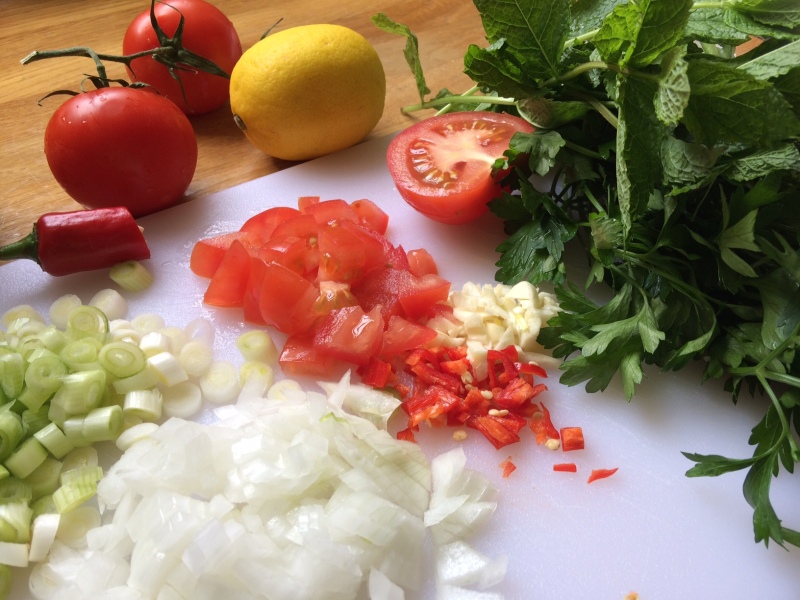 Rinse the bulgur a few times  and drain
In a large non stick pan, heat the olive oil and add the garlic and the onion including the spring onions and fry until slightly soft
Add the bulgur and stir well
Then add the chopped tomatoes, the parsley, mint, sun dried tomato paste, red pepper paste, pomegranate molasses and the lemon juice
Stir well, then add the ground cumin, salt and pepper
Stir vigorously, then add the half glass of water, cover the pan and reduce the temperature Leave to cook for 5 minutes, then remove from the heat
Stir again and leave for 15 minutes to cool down
Eat hot or cold
Best to leave it for a day or so in the fridge, drizzle with olive oil and decorate with mint and eat it chilled.