I‘ve recently been working with a cafe near where I live in London.  It’s in a charming little cobbled street that leads to the Thames.  The best seller is the soft Lebanese pizza — mana’ish, topped with cheese, meat or thyme.  That’s jibneh, lahim bil ajeen and zaatar to give them their proper Arab names. 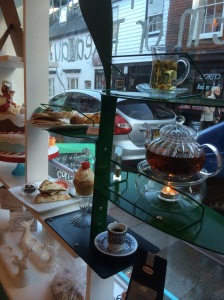 And just writing them reminds me of a very different street in Beirut where my family used to get its own warm, fresh mana’ish.    It was in the area beneath where we lived and the Holiday Inn just at the end of the Corniche.

It was right on the edge of the Green Line dividing the city — most of which was a no go zone. But down on the sea front, there was a district called Zaitouni.  The name has recently been commandeered by the developers who’ve dubbed the area just beyond Zaitounay Bay.  It’s been Dubaified into a sleek row of restaurants facing what was once known as the St George marina.  Way back then, it was a red light district, full of nightclubs and bars. It got seedier, then darker and more lost as the war went on.

But once it had hosted the glossier side of Beirut’s notoriously raffish nightlife, with Miss Lebanon staged there.  The best known winner from the 1970s went on to win Miss Universe — it’s the only time a Lebanese woman won the title and a victory still celebrated in a country that takes such huge pride in the reputation of its women for outstanding beauty.

But the enduring fame of Georgina Rizk rests on the fact that she was once married to a Palestinian fighter, Ali Hassan Salameh, who played a big role in Black September and the killing of Israeli athletes at the Olympic Games in Munich in 1972.  He was later assassinated by Mossad.  The story still has a dark, compelling glamour.  My parents remember Georgina Rizk well from that time — when my father used to sell beauty products and she was, I believe, one of his clients.  We were still living in a tiny flat at the bottom of the hill that leads up to the American University of Beirut and Hamra.  My family was poor, then, but still tenuously connected to the fabled high life being lived just a few streets away.  The road to the Museum was a river of traffic that divided us from that gilded shore.  Not long after, it became a more forbidding boundary when the war transformed it into the Green Line between us in West Beirut and the Christians in East Beirut.  The district was hollowed out; buildings ruined and abandoned, but taken over by a new wave of poor — Kurdish women working as cleaners or maids.  They had to negotiate their way to work each day through alleys overlooked by snipers.  I didn’t go that deep, but my nuns’ school was just on the edge of the area.  And my younger sister would go off and get us our mana’ish from a bakery in the shadow of the Holiday Inn.   Now, I make my own, mixing the paste for the zaatar, jibni or lahm and then taking it to a Lebanese bakery in a light industrial area just off the A40 in West London.

There, they make and mix the dough and bake the mana’ish for me.  The smell outside the bakery is incredibly evocative, transporting me to Beirut in an instant.

The area is pretty unprepossessing, full of box-like industrial units.  By day, it’s nondescript, although the smells and the number of Arabs frequenting it in a mix of abayas, headscarves, boxy suits and leather jackets gives it the feel of a typical, bustling  Beirut neighbourhood.  It harbours the most fantastic, secret little Lebanon, made up of pastry shops, restaurants and tents with heavy Arab lanterns and mashrabiya – the intricately carved wooden lattices allowing a little of the still pool of grey London light into the room.

At night, the empty streets pulse with Arab pop music deep into the small hours of the morning as belly dancers and singers perform in between impromptu dabkes or Iraqi and khaleeji dances where the women toss their long black hair convulsively.  Hookers and families face each other on either side of the tiny dance floor, which stone-faced waiters cross with trays of mezze and shawarma, trying not to be knocked off course by the frenzied dancers.  It’s the faintest echo of a life that was being lived and celebrated within earshot of my childhood — and is now endangered by the twin threats of extremism and moneyed vulgarity.  The taste of mana’ish brings the little figure of my short-haired sister in her jumper and trousers heading to the end of our street — as far as it was then safe to go — and bringing back that warm, always comforting luxury of our restricted lives.  And not far from there, the ghosts of that other, lost, mostly fictional Beirut still paraded with an exotic swagger and a cigarette to the lips.  A tiny remnant of that clings to me in a kind of caricature that some of my Lebanese friends like to conjure, dubbing me “Jacqueline” — their idea of what the fast women in my neighbourhood would once have been called… 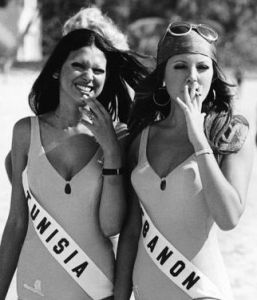 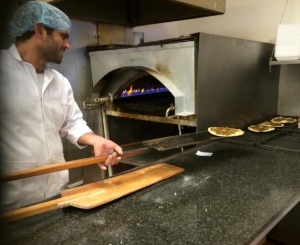 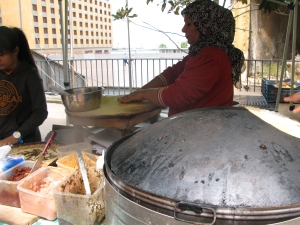 In a small bowl put the yeast, sugar and warm water, stir well, then leave aside for 10 minutes

In a large bowl sift the flour and salt, then add the yeast mixture and mix well with a wooden spoon

Knead the dough until smooth and elastic. This will take 5 to 10 minutes approximately.

Add water if the dough is too dry or flour if it is too runny.

Cover the bowl with cling film and leave in a warm place for 2 hours or until it doubles in size.

Once ready, remove the cling film, punch the dough down then knead for few minutes.

Cut it into small portions, around 8 balls.

Roll them well to make the perfect round shape, then dust with flour.

Cover with cling film and leave to rest for another 10 minutes.

When ready, dust each dough ball with flour and use a rolling pin to flatten the dough into a perfect round circle, 2mm in thickness and whatever size you like in diameter.

Use  a round plate and sharp knife to cut the perfect circle.

Cover with a towel and leave for 10 minutes to rest.

Mix the zaatar and olive oil in a small bowl until it forms a smooth paste.

Add more olive oil if the paste is still solid.

Then add the sumac, sesame and salt, mix well and leave aside.

Put the tray on the middle shelf, in a preheated oven, 220 degrees and bake for 5-7 minutes or until the Zaatar is sizzling and the dough is slightly golden.

Remove from oven and eat hot with a cup of tea (no milk and lots of sugar) and a side dish of green olives, tomatoes, and fresh mint.