The summer may almost be past now here in London.  But that means it’s getting to be a good time to go foraging again.  The mulberry tree next to the walled garden in the meadow behind our house looks like it won’t be providing anything like the fruit it once did.  I remember my excitement when I first discovered it — forgotten in a lost clearing of overgrown nettles and unruly shrubs.  But a friend told me about another tree in a particularly incongruous place — a car park in one of the towns that’s become — a little unfairly — a byword for suburban chavdom.  So, we made the trip to Staines.  And there the tree was in all its unkempt and completely ignored glory.  Maybe my life needs more excitement, but I felt a rush of pleasure when I saw it.

And soon I was greedily gathering the soft, juice-soaked fruit with my two friends, both in hijabs.  It wasn’t long before we attracted attention and sadly it wasn’t very welcome.  A man on a bicycle came up to us , a sweaty, lycra-clad vision of self-righteous obtuseness, and started haranguing us and swearing at us.  What did we think we were doing?  It was as if our attempt to make use of this little unexpected gift of nature was some kind of vandalism.  I would be surprised if he had any idea what he actually was objecting to.  Maybe it was the hijabs, maybe he thought we were planting bomblets in the branches or receiving coded messages from some terrorist mastermind — perhaps Ali G finally gone rogue after joining ISIS in his latest and vainest attempt to override his irreversible naffness.  Certainly, fear of such a thing has reached Staines.  One of its estate agents used to be called ISIS, but changed its name when it took on an entirely unexpected glow of evil.  It’s now called OASIS — which some survivors of the ’90s and Britpop might also greet with a little frisson of foreboding.  The company explained the change in a sweetly dim message planted across Staines on its For Sale signs in which the estate agents very clearly — and one would assume very unnecessarily — dissociated themselves from any link with the terrorist group and their ideology.  Home-sellers in Staines must have taken great comfort in this.   So, perhaps the guy on the bike was infected by this sense of encroaching danger — the alarm triggered by my friends’ hijabs.  Or perhaps, he was just a sad busybody, whose brain was somewhat less impressive than his over-developed calves.  Anyway, we carried on and achieved a heavy haul, bleeding with purple juice. 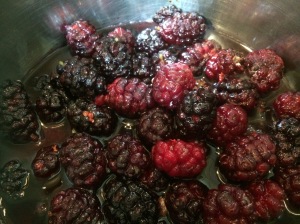 It reminded me yet again of my childhood summers in the Bekaa valley — long and formless and subdued in the burning heat.  I’ve written about it before — the white mulberry tree that stood in my grandmother’s garden and how I’d go and hide there when I fell out with my aunt,  just a year older than me.  It was the silkworms I found in the branches rather than the fruit that enchanted and fascinated me then.  We have lots of white mulberry trees in Lebanon for this very reason.  Villages harvest the silk and have for centuries made a little, home-made industry out of it, for which they are famous.  Not something likely to happen in Staines, although the name is at least appropriate if you’ve ever worn a white shirt or dress when picking mulberries from branches above your head.  The memory of stains is, I suppose, one of the main things I’ve ended up writing about here with these recipes and reminiscences. On that note, in the dying days of our summer, it might be time to raise a toast with a long, ice-drenched glass of mulberry syrup — although finding the fruit in the shops is hard as it spoils so swiftly…

Press the bag to extract all the juice

Discard the seeds and the skin

Add the sugar and lemon juice, stir well and return to the hob

Once ready, remove from the hob and leave to cool down

Pour in a glass bottle and leave in the fridge

Once ready to serve, put 2 large spoons of syrup in each glass, add loads of ice, then pour in fresh water