Tonight we are expecting the temperature to go down to minus two.  No snow yet, sadly.  But I have brought in a lemon tree from the garden, hoping to save the fruit that grew on it this summer.  An angel trumpet bush is also coming in, although its lavishly fragrant flowers fell several weeks ago.  Its narcotic leaves used to keep our white rabbit happy. Fires can be lit and the warmest of comfort food prepared — thick soups and stews. I have never grown used to the cold in England, although we have far more regular and dramatic snowfall in the Lebanese mountains.

But now, when you think of the snow there and the ski resorts opening, you also have to think of the Syrian refugees sheltering in hundreds of makeshift camps along the Bekaa valley as they try to survive the freezing cold. It’s the fourth year.  My aunts and uncles and cousins in the Bekaa know the harshness of winter, but nothing like what the refugees have had to cope with.  From the warmth here, I can look out at the bright cold sky with its stars shining impassively and await the morning frost without concern now my most delicate plants are inside.  I can make a soup with red lentils and watch as the steam mists up the kitchen windows.  No one has ever forced me from my home.  Not the militias, not the Christians, not the Israelis, no rockets or bombs.  Throughout many, many years of war, I had the luxury of being able to stay in my family’s home.  We had to take shelter in the basement, we had to go to the countryside at the worst times.  But we were always able to return home.  It may have been precarious, the streets may have been dark and dangerous.  The electricity may have cut out time and time again, leaving us without light or warmth.  But it always came back.  We always came back.  My father is still in the same apartment.  We lost relatives in the war, we lost years of our lives, we lost patience, we lost faith.  But we kept our home.  The reproduction French antique furniture is still there — the fussy glass ornaments, my father’s collection of colognes and his cupboard of pressed shirts and suits never had to be scooped up into rushed suitcases or discarded.  I didn’t think I was lucky at the time.  I thought it was just about as bad as it could be.  When I finally left and made it to Cyprus, a fireworks display near my hotel made me jump and cower.  But I had at least been able to leave my home because I wanted to, not because I was forced from it, with nothing to go to and nothing to return to.

The lure of home is so strong that some Syrian refugees still make the crossing back from Lebanon when they can to try to live again in their houses and apartments in Damascus, Homs or Deraa.  Even they are lucky, although not as lucky as I was in my high, exposed home above the Mediterranean, all but daring a rocket to hit it.  They haven’t been reduced to nothing but a wooden shack or tent, a few cushions, a rug and coffee pot to hold a family on some godforsaken edge of an already rundown and remote Lebanese town.  Here in England when the snow comes south — if it does — there will be traffic chaos, trains that slide to a stop and leave their passengers abandoned for a night, while politicians berate each other for not being able to govern the weather.  It’s one of the things — like corruption — that seems so small-time and amateur here compared to what we are capable of back at home.   Our corruption eats countries whole, our snow kills.  Childish, I know.  And not something I can even joke about anymore as I think of all those countless families strung out across the Bekaa valley and beyond, bracing themselves to live through another hopeless, frozen winter.   For many of them, there is no longer even the illusion of a lighted window somewhere in the distance holding out the promise that one day this will all end, that their home is still somewhere patiently waiting for them.   So, as I sit with a bowl of lentil soup, I think of the Lebanese mountains and Bekaa glowing with the translucent beauty of winter and I shudder. 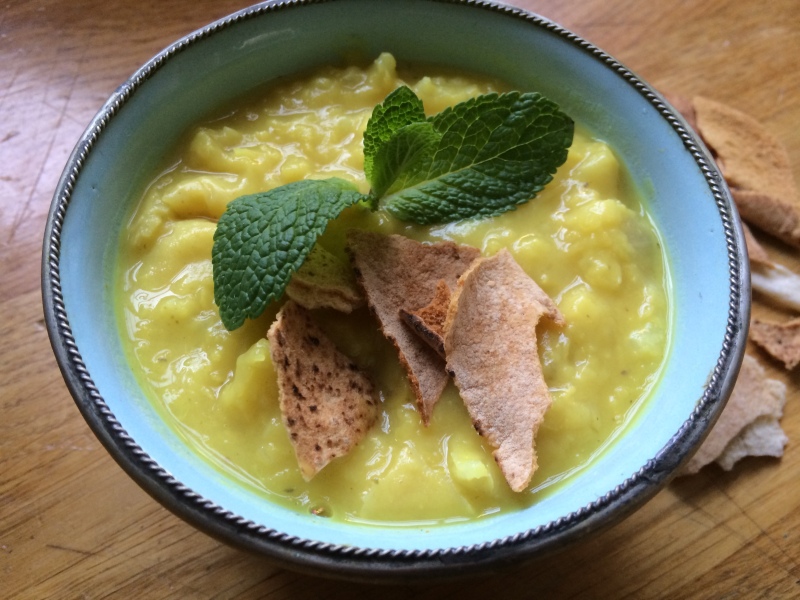 Wash the lentils in a deep pot

Make sure the water level is always covering the lentils; if necessary, add more hot water

Wash the rice and add to the lentils, stir and simmer gently for another 10 minutes

Add to the soup and stir

Stir well and cook for another 10 minutes

Garnish with parsley and serve hot with toasted lebanese bread