There are songs about love in every form — lost, unrequited, blind and all embracing — and there are songs about the other big subjects — death, loss and the many glories of life that somehow slip through all the bad stuff.   Sabah — who died last week — sang about most of them.  But the song of hers I liked the most was about potatoes — well, not really about potatoes but about living the simple life and not needing anything but a hunk of bread, some olives and a little room to sleep in.

The fact that she sings it in a pink, Pucci-esque dress only adds to the charm.  So, the recipe I am giving here to remember Sabah — and my cousin, Wasim, who was once married to her and Hiam, his sister, who was my dear friend — is about as basic as you can get.  Just some pepper, salt and cumin sprinkled onto mashed potato mixed with burghul wheat — you can use meat instead, but this is the absolutely simplest version that we would eat up in the Bekaa valley.  As a child, I’d wolf it down and then head off into the fields, probably spinning a Sabah-like dabke as I did so.  When I was with Hiam in Spain this summer — not knowing that it was the last time I would see her – we chatted about Sabah and her brother and she told me why they’d broken up, although with Sabah having finally notched up nine husbands, the odds were always on it ending badly.  I had gone to see Hiam in Spain to do a cooking class for her friends and neighbours.  In the end, she was too ill to organise the classes so we just spent the time cooking for ourselves, eating and gossiping.  Sabah has been mourned as the voice of a long lost golden age, burnished in the memory now, of a flourishing of Arab culture in music, film and literature — before so many other forces emerged to darken and blur and smother the picture.  I think my cousin, Hiam, was one of those who kept that light burning — and with her death just weeks before Sabah, my world got a little darker, too. 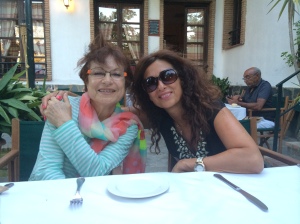 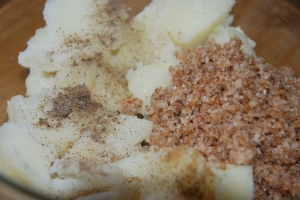 In a small pan, put the potato and cover with fresh water

Place on the hob at high temperature

Once the water starts to boil, reduce temperature and leave for 1/2 an hour or until soft

Meanwhile, soak the burgul in 1/2 glass of water

Once the potato is ready, remove and peel

Sieve the burgul and add to the potatoes

Add the rest of the ingredients, leaving out the oil

Best with olives and onions