I don’t remember ever being tempted as a child to dress up in a bowler hat and umbrella and pretend I worked in the City in London.  Nor did I ever want to stick a safety pin through my trousers and tear my t-shirt and act like a punk in the Kings Road.  I did have big hair and dresses with shoulder pads but that was the 80s — when the world dressed like the women of Saddam Hussein’s boudoir – so it wasn’t a big stretch.

It was a surprise, then, when I moved to London and found that a certain type of Englishman ( and woman to a much lesser extent)  liked to dress up as their idea of an Arab.  I guess the blame lies with Lawrence of Arabia — the film as much as the real man.  Is it the romance of the desert?  Or just the closest that most Englishmen — famously up for a touch of transvestism — dare to get to being in a dress?  I don’t think it’s got much to do with the old respect for the austerity and authenticity of Bedouin life that you find in the great, damaged explorers like Thesiger and Burton.

It’s more Carry On Follow That Camel than Arabia Deserta.   It’s still ridiculously but endearingly English to me.  And it’s been very good for business.   The fancy dress goes with lavish tents filled with Moroccan lanterns and burnished scimitar-shaped coffee pots.  Throw in a palm tree, beaten copper trays and hundreds of cushions.

It’s not that similar to the tents that the rich take out into the deserts of the Gulf at the weekend.  They are more like portable luxury hotel rooms, with huge fridges, tvs and satellite dishes the key items. But that’s because they want only a limited reminder of the heat and desolation that so bewitched English explorers.  In Surrey, the greenery is like the desert in Saudi Arabia — endless and a little dull.  But that doesn’t stop the English — young and old — entering into the spirit.

Some go deeper than others — 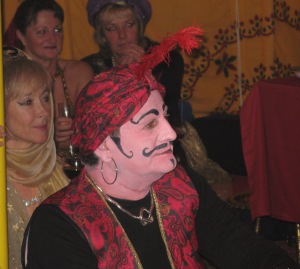 or even deeper still —

The piece de resistance is almost always when the belly dancer arrives.

It’s interesting watching the English watching her.  Is it art?  Is it ok to watch every movement of her body or is that verging on the prurient?  You can see the questions on the faces.  Fortunately, it’s nearly always resolved when she pulls someone up to dance — then the focus is less explicit and it’s more about having an embarrassingly good time, which the English know how to do very well. To go with all of this, of course, a feast is needed.   Fakhid al riz — a recipe I have already given here — is perfect.  A whole sheep would be best.  But if nothing else, a Lebanese barbecue works just fine.  I’ve done the shish taouk already.  There are two other main parts of the barbecue — lamb mashwe and kofta mashwe.  This is the recipe for kofta mashwe.

Take a small amount of the meat from the mixture, the size of a ping pong ball, and roll it in your palm

Once the coal is very hot, grill the skewers, each side for 3-5 minutes or until slightly golden

Serve hot on a bed of saffron rice and tahini sauce.

You can cook the Kebabs under the grill instead of the barbecue.

If you find it difficult to skewer the kofta, just flatten the meat and make it in the shape of a small burger.