This is one of the most evocative ruins in Beirut.  An Italian restaurant that was once famous for its pasta in Phoenicia street just behind the sea front.  It’s been derelict for years.  Next to it is a car park, which will probably be transformed into a new high-rise soon.

One of the tallest buildings in the city is already almost finished behind it.  Like a lot of things in Beirut, the restaurant was both fun and tacky.  Its name is a giveaway — Quo Vadis.  That was the title of an old film about the Roman empire — it means, ” Where are you going?”  So, it’s a nice, neat symbol for anyone writing about the past, present and future of Beirut. But it could also be a somewhat forlorn question to all the many millions of Lebanese like me, who left home and have never come back, except for the occasional holiday.  There are many more of us outside than inside.  What made me think of this was meeting my aunt, who used to be my best friend when we stayed in the Bekaa.   She was just passing through London for a day.  We hadn’t seen each other for nearly twenty years.  I told her how I had been thinking about her as I was writing down some of my memories from that time.  The last time I had seen her was in Lebanon just after I had had my first child.  We sat like strangers then.  But now we share stories easily.

The long, long, hot days running through the fields, hiding from my sister, who was a little younger and a telltale.  We’d lie under the mulberry tree, smoking, waiting to be called to eat the little birds my uncle had caught and was barbecuing.  Sometimes, we’d hear the deep voice of the great Egyptian singer Abdel Halim Hafez wafting over to us from the balcony of the neighbours’ house.  The son would play it to attract my attention.  I remember how the love song, Sawah, which I loved, would ebb and flow for what seemed like hours.

What has happened since is another story we now share.  I left in a reasonably dramatic way — which I might describe more fully in a later post — and made a new life in London.  My sister — equally dramatically, maybe even more so — went to Sweden.   My aunt went to Canada — the only difference besides the destination being that she left for economic rather than romantic reasons.  Only two of the children from her generation and that big family are still in the village.   We no longer know who the lucky ones are — those who stayed or those who left.  But a few things still hold us together.  An old song, the rustle in the wind of an unnoticed tree, bearing some incongruously exotic fruit in a suburban street — and of course the food we take with us wherever we go.  It’s Ramadan so my aunt — who is now veiled — was not eating.   It was too late to wait for one of our endless summer days to end as she had a plane to catch.  But I would have liked to share something like we used to have in the Bekaa — the tenderest meat heated above little burning coals.   Not a bird, but maybe chicken.  Shish taouk — the cubes of chicken skewered between bright peppers and all on a bed of bread soaked in their juice and the garlic sauce  known as toum — I would like to have been able to share with her one more time.   Quo Vadis — it’s a question all exiles like my aunt and me can never quite answer, but hope — despite everything — will always still lead us from time to time back to our original homes, whatever is left of them. 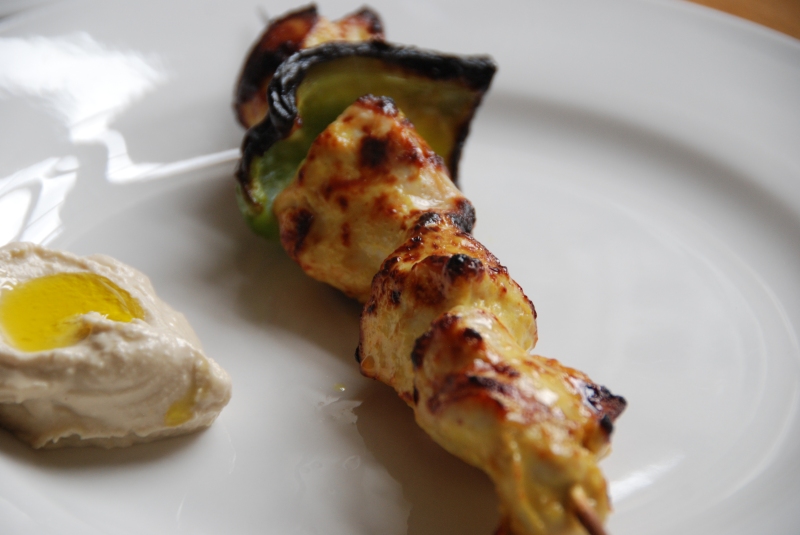 2 chicken breasts without the skin

(I promise this recipe works —  many people are worried it will take a long time to produce the fluffy white sauce, but not if you use an immersion blender/stick blender as here.) 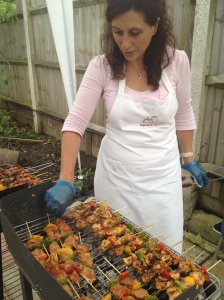